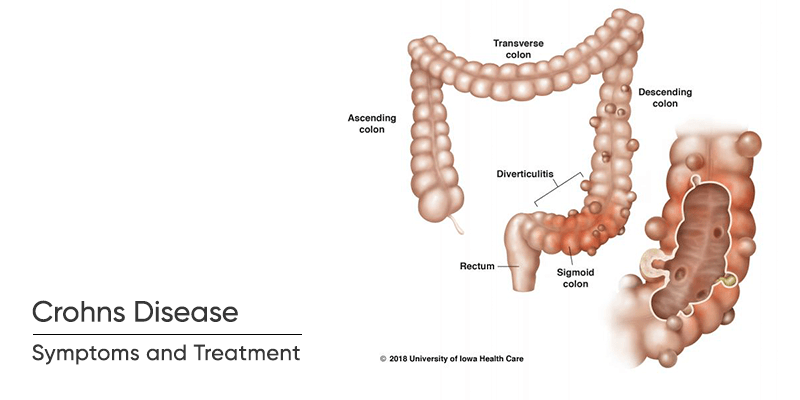 Crohn’s disease is an inflammatory bowel disease (IBD). It causes the inflammation of your digestive tract, predominantly the small bowel and the large bowel becomes inflamed leading to various problems such as abdominal pain, severe diarrhoea, fatigue, weight loss, and malnutrition.

The inflammation often spreads deep into the affected bowel tissue, it can be both painful and debilitating and may lead to life-threatening complications.

The exact cause for Crohn’s disease remains unknown like its cure. Diet and stress were once suspected to be the cause but now doctors know that these factors aggravate the symptoms and not exactly what causes Crohn’s disease.

The two main factors that are believed to cause Crohn’s disease are:

They play an important role in the development of the disease. Some of the other factors that put you at risk of developing Crohn’s disease may include:

People with severe Crohn’s disease may experience symptoms in their other organs instead of the bowel such as inflammation of skin, eyes, joints, living or bile ducts.

The most commonly affected area of Crohn’s disease is the last part of your small intestine and colon. The signs and symptoms can range from mild to severe. They may come without warning (flare-ups) and sometimes you may experience no to a little number of symptoms (remission).

Who are at risk?

People living in industrialized countries, younger people, people of a certain sect like eastern European Jews are more prone. Also there is a genetic tendency. Cigarette smoking, using painkillers like brufen may cause Crohns.

People who have long-standing fistulas which do not respond to conservative treatment may have Crohn’s disease.

Once these tests are completed, if your other possible reasons for your symptoms are ruled out, they may conclude that you have Crohn’s disease. The doctors at chennai laser gastro clinic may request you to take these tests several more times to look for diseased tissue and determine the progression of the disease.

There is currently no cure for Crohn’s disease, but treatment is offered to alleviate the symptoms which can cause disruptions to normal life. The goal of this treatment is to primarily reduce your inflammation which causes the onset of the symptoms. It also helps in limiting the complications of the disease. In best cases, the treatment may lead not only to symptom relief but also to long-term remission.

Your doctor may prescribe you medicines to help you ease your symptoms. Medicines are usually the first step to treatment in Crohn’s disease, you may be asked to take antibiotics, anti-inflammatory drugs, immunosuppressant therapy to help you with your symptoms.

Almost 75% of patients who are diagnosed with Crohn’s disease will require surgery at some point in their life. If diet and lifestyle changes, drug therapy or other treatments do not relieve your signs and symptoms, your doctor may recommend surgery.

However, surgery does not cure Crohn’s disease. Your surgeon removes a damaged portion of your digestive tract and reconnects the healthy sections. Surgery may be used to close fistulas or drain abscesses.

The benefits of this surgery are usually temporary. It often recurs, frequently near the reconnected tissue. The best approach is to follow surgery with medication to minimize the risk of recurrence.

A diet planned followed by one person may not work for another. This is because the disease can involve different areas of the GI tract in different people. It is important to find out what is best for you. Write down how your body reacts with one kind of food, and keep a track of your symptoms. Lifestyle and diet changes may help you reduce the recurrence of symptoms and lessen their severity. Some of the steps you can follow are

Work with your dietician or doctors at chennai laser gastro clinic in planning out a diet plan which works best for you and your body. Relaxing and exercising regularly would not just help you physically but also mentally with Crohn’s disease. Though Crohn’s disease is chronic, you working along with your physician can try your best to relieve your symptoms and do what is best for you and your health.