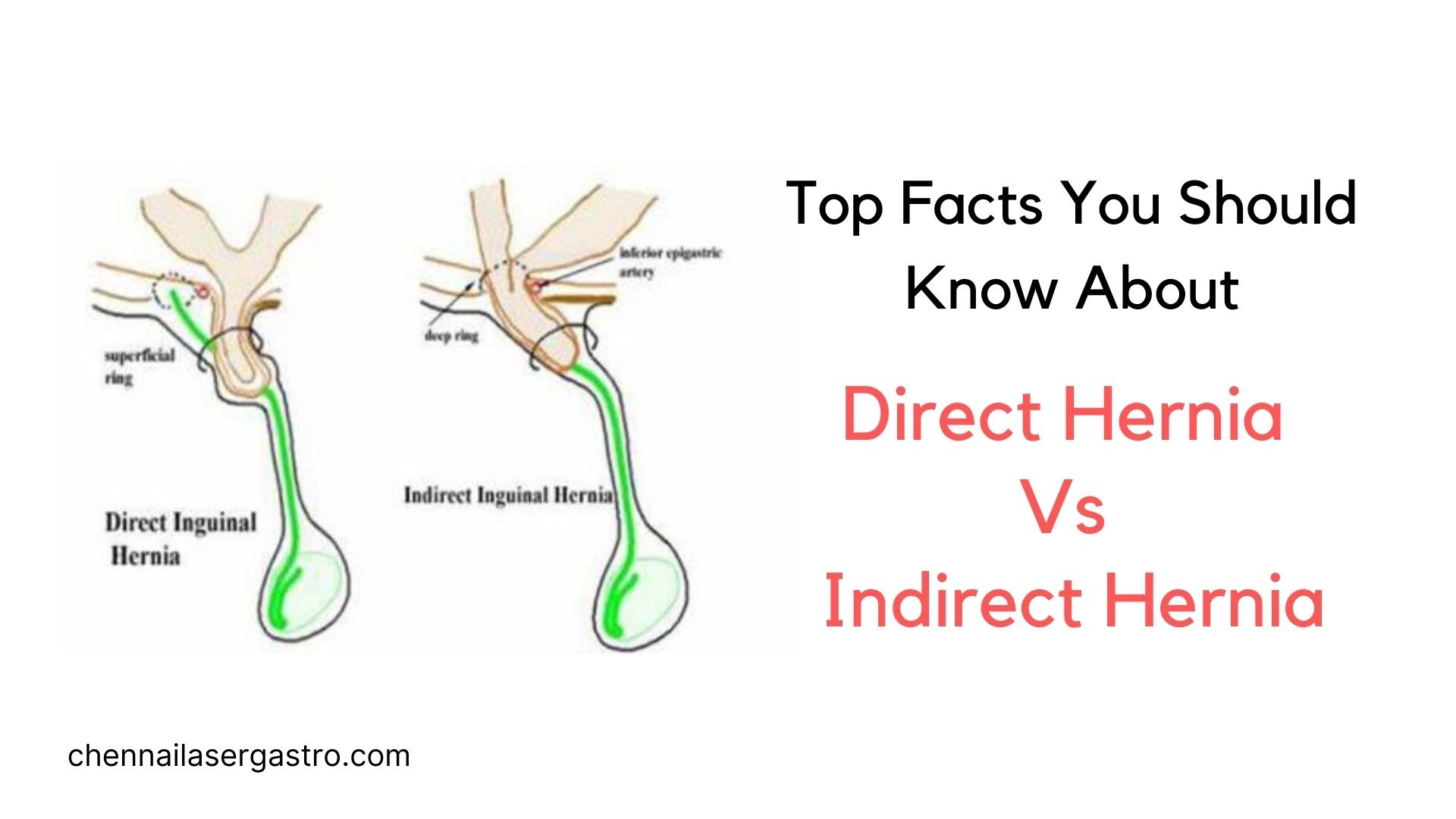 A hernia is a condition where an organ or an internal part of the abdomen pushes its way through the surrounding tissues that are protecting it. A hernia can develop in various places of the abdominal cavity. The most common location of hernias are inguinal hernias that forms at the weak spot of the abdominal wall present from birth or caused secondary to other conditions such as abdominal surgery, injuries, undue strain or old age. Risk factors that may increase the chances of inguinal hernias are old age, obesity, being male, a family history of hernia, smoking, illness with chronic cough and physical strain. An inguinal hernia is termed to be “direct” or “indirect” based on how and when the hernia forms.

Like most other hernias, direct inguinal hernias involve a weak space which has thinned out as a defect in the abdominal wall.  This weakening develops over a period of time, due to the strain from everyday activities and aging. Improper lifting techniques of heavy things can put extra pressure on the abdominal muscles, making them weak and allowing them to tear. Direct hernia usually occurs through the lower abdominal wall known as the groin. Thus inguinal hernias that occur directly through the inside wall of the groin are called direct hernias. This makes the hernia appear as a larger bulge initially. Direct inguinal hernias do not manifest into the scrotum as they do not descend through the inguinal canal.

Unlike direct hernia, weakened or injured abdominal muscles are not the cause for indirect hernias. When an area of abdominal muscle tissue called the inguinal ring fails to close up while the baby is still in the mother’s womb, it forms the cause for indirect hernia that may present even during later years of life. The function of the inguinal ring is to allow the testicles to drop into the scrotum after which it usually closes before birth. If the inguinal ring fails to close and remains open, a part of the intestine can also push through the open ring and descend into the scrotum.

An indirect hernia is much less common for females to develop because the round ligament of the uterus present within the inguinal canal acts as an additional barrier supporting the muscle. The inguinal canal is also structurally smaller in females, reducing the chances of the internal structures to slide down. However, if it occurs in females, the ovaries and other parts of the reproductive system can slide through the opening and cause a hernia.

Facts on symptoms of direct Vs indirect hernia

Direct or indirect hernias, if large enough in size, can appear as a bulge on either side of the groin. Groin pain, burning or aching sensation in the groin, heavy or dragging sensation in the groin that is felt at the end of a day or after prolonged activity are the other common symptoms of any type of hernia. Some hernias may not cause any pain until they get larger. If there is bowel involvement along with the hernia, the pain can be even more difficult to localize as the discomfort may be felt in the abdomen or the pelvis. Men usually feel pain if the hernia occurs with the intestine pushing down in to the region leading to the scrotum. If the hernia is not severe or large enough, symptoms may be hard to detect.

A direct hernia usually develops in adulthood and mostly presented in older age, unless it occurs as the result of a specific injury or trauma in younger years. A bulge is the first sign of most cases of direct hernia accompanied by dull ache which is seen to be more common than sharp pain. Direct inguinal hernias are usually more symptomatic after prolonged standing, walking, running or other activities that involve the core abdominal muscles. Symptoms can exacerbate even while laughing, coughing and sneezing.

An indirect hernia appear right from infancy. This is mainly because it occurs as a congenital condition present from birth. An indirect hernia is mostly noticed in infancy only when the baby is crying. Highly common in children, it is diagnosed in up to 5% of new born babies and up to 30% of premature babies. Often, it is discovered in the first year of life but can remain undetected until adulthood.

Signs of complications are higher with indirect inguinal hernias as they are more likely to cause bowel obstruction than direct inguinal hernias. The reason being that the tunnel described as the inguinal canal through which the indirect hernia descends is too narrow. The narrow area widens, enlarges and gets stretched as the canal travels downward. This abnormality can strangulate the tissues which are herniated down the canal causing intense pain. Another sign of bowel obstruction can be red or purple discoloration of the area of bulge. Strangulated tissues can die within few short hours of inadequate blood supply. There is need for immediate medical attention if the hernia is presented with any of these signs. Dead bowels found in the area at the time of surgery usually require a bowel resection. This dreadful complication can make it difficult to resolve the condition and may create further problems in future.

To book your slots for the best hernia treatment in Chennai or to get your answers about Hernia, call us today!